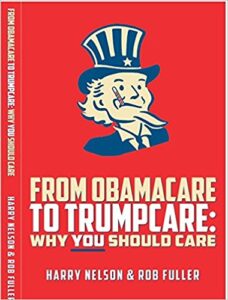 I wish I had an eidetic memory where I could recall things I read more easily. People who know me well, can tell you that they always see me with a book, even when walking on the street. Not sure why I read so much since I forget most of it soon thereafter. I think though the reason I keep going is that some things stick and they inform my perspectives. I don’t ever proclaim to be really good with the details and fine points and tend to stick to the big picture. I write all this by way of introducing a somewhat controversial position – that this Healthcare Bill vote/non-vote on Friday was a win-win for Trump.

Let me explain why.

The first step is understanding what Trump means when he says he’s an “excellent negotiator” who is going to negotiate a great deal for America. The newspapers and news channels will try to impose their editorial analysis on their readers/viewers and attempt to pigeonhole Trump into a corner by writing about “events” in a vacuum as if each event is its own negotiation. It’s a big mistake if you fall for this.

Negotiations are about a series of events that lead to a big event. The vote on Friday is in my view just another micro-event in the larger negotiation to reform Obamacare.

The first flaw in going down the rabbit hole of trusting the media, is forgetting that the media’s #1 goal is to make money. This imposes a bias on the media to spin the facts in the best way it can to sell ads. I don’t want to sound so negative and depressing. But ultimately the media will always look to spark a controversy because nothing spells the doom of media like boring news. Once you accept that you have to read and watch the news thru this “bias filter” it really changes how you interpret what you are reading and watching.

Here’s an example from the last two weeks with Jason Greenblatt who is the US Special Envoy to Israel. To be clear I knew Jason as a kid. I knew him in college. His brother was my counselor. I even knew him before he went by Jason and used his Hebrew name. We go way back. But I didn’t need to know him to know that the media was misrepresenting his recent trip to Israel. Here’s what I mean.

Did you see all the big headlines that Greenblatt is an enemy of Israel and he’s bringing back the two-State solution? If you carefully read the articles and applied the bias filter, you could see that the correspondents and professional “opinionators” were stoking fires and twisting facts to suit their agendas to grab attention and sell ads. The media took the fact that he visited with Abbas as a vote of confidence in a two-state solution. Greenblatt never said he was supporting a one-state or two-state solution.

Trump of course – as he has said numerous times during his candidacy – is not signaling his intentions yet (and this is where I am going with this article btw). And yet the media was quick to pounce on Greenblatt with their own interpretations they tried to ram down our throats that his meetings “clearly indicate his and the Administration’s re-awakening of a two-state solution.” I wake up some days and wonder if people understand that the media is often just a big hoax preying on the fears, concerns and frustrations of people.

So let’s get back to Trump and his current failure to overturn Obamacare.

If you look at all the media coverage, it looks like Trump is going down the toilet. If you talk to friends who absorb this media coverage as naturally as a member of a Kiddush club downs a nice shot of 16 year old Balvenie, then it also looks like Trump’s first 100 days are a disaster. How quickly people forget that during the entire negotiation of running for President and winning the Job (biggest negotiation ever) the Media was totally embarrassed election night as all the polls and surveys and confidence numbers were just flat out wrong.

If one is able to apply the bias filter and look at current events through a telescope that give you access to seeing the big picture instead of a microscope that focuses on each event at a cellular level in a vacuum (I thank my Dad for this wonderful analogy), a very different picture emerges. Sort of like the difference between taking a digital photo and a Polaroid Snap. Instead of the instant image you see with a digital photo, the reemergence of the Polaroid snap gives you time to watch the picture develop. It gives you some time to see the colors and images unfold. In the real world the analogy is like taking the time to think about the context of each event (what came before and what might come after). Once you pause and pull out your telescope, all of a sudden the microscopic and biased media analysis becomes much less relevant and compelling.

If you think about Trump’s most important issues in terms of “change”, clearly Obamacare is a big ticket item. But so is the Wall in Mexico (and immigration overall), tax reform, the Middle East, and in general just cleaning up Washington. Even Kasich was on CNN today in the most animated I’ve ever seen him, ranting about how we are not a Parliament and that Democrats need to cross the isle and start working with Republicans. And if you paid attention to Trump during the campaign, he said over and over, “I am not going to tell you my strategy the way the Armed Forces would pre-announce its intention to bomb certain cities in Iraq.” He basically said again and again, “you will not see me coming” and that’s how a great negotiation is conducted. You do the unexpected and strike where people aren’t looking. And this is why the Media is always in a frenzy because they can’t put him in a box.

On a related note, if you talk to Doctors and other people knowledgeable about Obamacare, they all agree that this Bill to overturn Obamacare was too hastily written, and premature. So if you take away the political angle, the fact is the healthcare Bill was not yet ready for prime time. But now let’s add in the politics and see what this really means for Trump.

I have two thoughts.

First, using Ryan to introduce and play with the Bill, gave Donald Trump an opportunity to see who his friends are and who are not his friends. In different arenas this is called “Testing the waters” – and this has become a term of art in the investment world lately with crowd funding. Yes, Trump appears from a media standpoint to have sacrificed some political capital in order to go through this process but look at what he accomplished from a NEGOTIATING standpoint. He can still re-introduce a Bill a month from now and even two months from now or more. And just like he did with the Travel Ban, he ultimately got what he wanted. And isn’t it funny that airlines are banning electronic devices from the same countries and yet no one is freaking out. Amazing how a double standard can work isn’t it.

As a self-proclaimed great negotiator, Trump knows that ultimately no one ever remembers the negotiations. They just remember the deal. And in case you forget, his book is called the Art of the Deal. Right now, the Bill to reform Obamacare that failed on Friday is simply a stepping stone to the larger negotiation that Trump is still conducting to ultimately overturn Obamacare.

And if he doesn’t ultimately even affect Obamacare RIGHT NOW, now he has leverage on one of his next agenda items (e.g. the Wall or tax reform …) that are coming down the pike.

Don’t get fooled by the media.

If you watch it, just admit to yourself that you are doing it for the enjoyment’s sake. And, like I did today, to gain a sort of personal access to celebrity politicians and pundits where you can see them live in the flesh or in print. I enjoyed watching Kasich on TV today. But I didn’t get fooled either into forgetting that this is all staged for my attention so that CNN can sell me ads and Kasich can get his name out there. Bernie Sanders was waiting in the wings too btw on the same show. All for my entertainment.

News can be fun. Just don’t treat it like Gospel. Think of it as something more like your mother-in-law talking to you. Sometimes there are kernels of truth in there but sometimes there’s a woman overprotecting her daughter who’s married to you. (And I like my mother-in-law so don’t read too deep into this).

Btw I started this micro-rant with the idea that the healthcare Bill on Friday was a win-win. I have tried to describe the first win (that Trump knows his friends/enemies more clearly now) which Trump will use in future negotiations. What about the 2nd win? That’s easier actually. Had the Bill been introduced and passed, clearly that would have been a win.

Btw, I am not going to pretend that anything I am writing about Trump is because I know he is this great tactician. The problem is that we’ll never know because he’s never going to admit it. There’s no upside as a negotiator to ever open the kimono without exacting a payment in return. And that’s ultimately my point.  What we do have is the opportunity to believe he might be. And maybe that’s enough to put some cheer in my day.

As this Uber driver told me in New Orleans a month ago. If Trump fails, we all lose. We are all on the same plane now and just because some people have a beef with the pilot does not mean we should be trying to crash the plane.

I prefer in my own small world of mostly ignorance to consider that Trump is surrounding himself with a team that will execute LONG-RANGE tactics to negotiate a great deal for America. Much better than the alternative.

If you really want insight though on Trumpcare, then read my friend Harry Nelson’s book featured in this blog post. https://www.amazon.com/ObamaCare-TrumpCare-Why-Should-Care/dp/0692823905

P.S. My brother Ivan writes these kind of long posts each month. Good thing the gene pool fizzled out after him. I just felt cathartic today writing this. Now I have to go look for a telescope.

P.S. #2: If you'd like to comment on this, just email my partner Michael from our Digital Marketing company at www.GetVisible.com. He loves when I stir up the pot.

Sign up to receive Postings via Email. Your Email will not be shared with anyone.