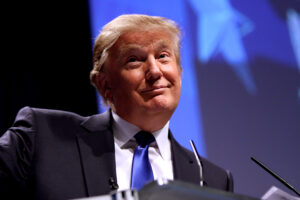 Rolling Stone and the Guardian had two extensive articles recently on the wonder of Trump's campaign and why he is appealing to so many different segments of constituents.

I wanted to write a short essay from the perspective of an everyman (that's me) who is a businessman (www.ladezign.com) but still does not read the papers, does not habitually watch the news, and is not even so politically sensitive to all the nuances of what it means to be a Republican or a Democrat. I do get a lot of my news from Robin Quivers though at least 3 days a week.

Despite my apparent shortcomings though in regards to political awareness, I do have a few things to bring to the discussion which I felt inspired me enough to be qualified to write today's short article.

1. The media's job is to sell advertising and make money for the media company owners. This is not to say that reporters and broadcasters and writers lack a moral compass or lack a desire to convey truthful analyses of events. But it is fair to say that sound bites sell, sensationalism sells and distorting the perception of events by creatively cutting dialogues where they "play" better are all tactics shared by the bulk of media oriented businesses. And as Seinfeld would say " there's nothing wrong with this" too.

2. I watched The Apprentice for years which I feel has given me more insight into the Donald's actual decision making process than what most people can intuit from the sound bites they are witnessing on TV during the campaign. Tragically, the takeaway from the Apprentice is that Donald appeared to flip from week to week and fire people for opposite reasons without reservation. I mention this because on one hand you could infer that he lacked conviction to specific theories of employment while just as easily you could say he adapted to situations week after week which required seemingly contradictory resolutions.

3. I know one of his employees for over 30 years and have heard anecdotally that Trump is a wonderful employer regardless of race, gender or religion. Of course don't try to steal his spotlight like the woman did on Apprentice, but that didnt really bother me much.

4. I own one of Trump's books about business though I don't recall reading it. But i know substantively the art of the deal is about negotiating and knowing the strengths and weaknesses of both sides and how far you can push.

Here's my analysis of the campaign so far which supports a logical understanding of why he is beating his fellow candidates – which is not to say he is also winning the hearts of America at the same time. this remains to be seen.

One of my favorite books of all time is Mickey Spillane's "My Gun Is Quick" which starts like a Tale of Two Cities. In short, Spillane writes in a very long opening paragaph that the world is an Arena filled with Gladiators and if your gun isn't quick, you are dead. I have always remembered this book because it informs my actions when I perceive that I am in an Arena that requires a serious fight amongst competitors.

The Republican race for the candidacy is simply an Arena filled with Gladiators. This is not Rome though where dirty and illegal tricks will prevail. The rules suggest though that to be victorious means using whatever tactics are available in your arsenal of psychology, finance, oratory and other arrows in your quiver.

Rolling Stone suggested that Trump is simply more adept than his peers in manipulating the Press to fight his battles for him on their dollar. And he won two very large battles simply by marginalizing two of his competitors with aggressive name calling tactics. By calling Bush, low energy, and by referring to Rubio as little Rubio, he transformed both of these qualified candidates into substandard victims. Verbal abuse is dangerous for example when its immoral or illegal or hurting a relationship like Parents and Children or Workers and their employees. But here, the only meaningful relationship that exists at the end of this race is that of Victor and the Vanquished.

My father once told me that in one of his first campaign speeches he was in his twenties running for city council against an incumbant who had been in office for over a decade; and, who was a wealthy banker to boot. My dad walked up the podium in front of hundreds of senior citizens (this was Miami Beach in the 60's mind you) and instead of talking about issues or himself, he channeled some righteous indignation and bellowed out "Do you want a banker running this city?" My dad was laying the ground work for Trump type of campaigning over 40 years ago. And that stuff worked then and it works now too.

I did a lot of informal poling recently to ask people why they are so angry about Trump. And many of the answers I received SEEMED to reflect the same type of thinking that enabled my dad to win an election against a more qualified opponent. Just as my Dad tapped into people's feelings, Trump is doing the same thing.

Creflo Dollar, a preacher in the South, with a tv show called CHANGING YOUR WORLD, teaches that EMOTIONS move one away from the RIGHTEOUS PATH. Emotions actually comes from two latin concepts – the letter "e" means away and "motion" means movement. Emotions technically move you away from where you know your religious belief wants you to be. And even for the nonreligious, there is a path you want to be on and emotions can deter you from the course you have accepted for yourself. And when we use emotions to make decisions, those decisions lead to actions which lead to habits which lead to destiny.

Emotional responses are a large catalyst which drive positive and negative reactions to Trump more than most candidates.

Here are some of the responses I have been cataloguing since asking people their opinions of Trump and the campaign.

I consider many of these responses to be emotionally driven because they sound like they are based on sound bites the media portrays over and over.

Even now, as of March 13th, the ongoing messaging coming out of the media is trying to portray Trump as a Mussolini character by blowing up out of proportion these protesters at rallies and how Trump is saying to beat them up and I'll cover your legal bills. Trump's issueless grandstanding is easy fodder for the media to take him out of context and sensationalize him to sell more ad spots. Sure people came up to me this weekend at Synagogue and said that i sounded like the people in blinders in the 30's when similar hate-filled speeches ruled the day. I think the difference is that in the 30's those speeches were clear from all angles about the intent of those demagogues. But Trump does not sound this way without some distortion and splicing (to me at least).

It doesn't matter if the media causes harm and distracts voters from the issues because a week from now there will something else the media trumpets to gain attention again and sell more ad time.

This is not to say that I am against the media. Quite the opposite. The media, combined with live feeds online has given more people more access to the election process than has ever existed before. The idea that a YouTube video from Saturday Night Live can reach millions of people in hours, or a YouTuber can post a status update that teases 15 million followers to like, share and retweet the post is quite mystifying when I still remember what it was like to take a quarter with me to the mall to use a pay phone to call my mom to pick me up.

We are all tethered like Sheep to the mass Shepherd of the Media and despite its flaws, the benefits fulfill so many of our voyeuristic fantasies that delude us into thinking we are part of the action simply because we see it up close.

The challenge for the modern person is to sift through the media noise and find the beating heart within our own consciousness that can override the instinctive emotional responses clamoring for online attention. We have to flex our muscles and hone in on the consistent thinking that is strong enough to withstand the criticisms and protests we are bound to experience as we share questionable views with our friends and peers – just like I am doing with this article.

To complete my thought here, I am still not decided on a candidate – though in California I feel as if my vote doesn't count for much. What I am determined to do though is to at least educate myself enough to not be blind to the power of emotions and the power of the Media to sway my opinions too far from my own internal base of operations. And to find the strength to engage in dialogues that might inform better decisions on my part.

And my prediction is that after the Florida primaries, we will find Trump spending more time on actual issues as the playing field levels with less candidates to knock out of the race. To this point, the rules in the Arena dictated psychological tactics such as have been highlighed above. The next phase of the race will be more focused on substance rather than form. I hope I am right.

Sign up to receive Postings via Email. Your Email will not be shared with anyone.